Works on Objectivism by Leonard Peikoff

“Until or unless I write a comprehensive treatise on my philosophy, Dr. Peikoff’s course is the only authorized presentation of the entire theoretical structure of Objectivism, i.e., the only one that I know of my own knowledge to be fully accurate.” — Ayn Rand 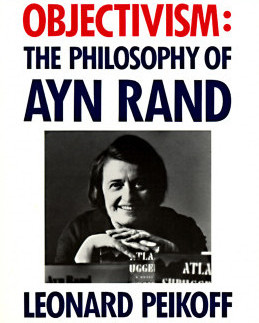 Objectivism: The Philosophy of Ayn Rand (OPAR)
Ayn Rand’s philosophical ideas are spread through hundreds of fiction and non-fiction works, radio addresses, taped and untaped lectures, seminars, and discussions. Until the publication of Peikoff’s magnum opus Objectivism, there was no single book, the interested student of philosophy could turn to, that presented Rand’s philosophy as a single integrated whole. Thanks to Dr. Peikoff this is no longer the case. Leonard Peikoff’s Objectivism: The Philosophy of Ayn Rand covers every philosophical topic that Ayn Rand held as important–from the objectivity of concepts and the metaphysical nature of man, to the virtue of selfishness and the purpose of art, this book covers it–and more.

The Ominous Parallels: The End of Freedom in America (TOP)
“How America has been detoured from its original path and led down the same road that Germany followed to Nazism. Self-sacrifice, mysticism, racial ‘truth,’ the public good, doing one’s duty—these are among the seductive catch-phrases that Leonard Peikoff dissects, examining the kind of philosophy they symbolize, the type of thinking that lured Germany to its doom and that he says is now prevalent in the United States.”

The DIM Hypothesis: Why the Lights of the West Are Going Out (DIM)
“Peikoff identifies the three methods people use to integrate concrete data into a whole, as when connecting diverse experiments by a scientific theory, or separate laws into a Constitution, or single events into a story. The first method, in which data is integrated through rational means, he calls Integration. The second, which employs non-rational means, he calls Misintegration. The third is Disintegration—which is nihilism, the desire to tear things apart. In The DIM Hypothesis Peikoff demonstrates the power of these three methods in shaping the West, by using the categories to examine the culturally representative fields of literature, physics, education, and politics. His analysis illustrates how the historical trends in each field have been dominated by one of these three categories, not only today but during the whole progression of Western culture from its beginning in Ancient Greece. Extrapolating from the historical pattern he identifies, Peikoff concludes by explaining why the lights of the West are going out—and predicts the most likely future for the United States.”

Many of these are also available for free on Ayn Rand Campus.

The Art of Thinking

Eight Great Plays — As Literature and as Philosophy (1993)

The History of Philosophy, Volume 1

The History of Philosophy, Volume 2

Induction in Physics and Philosophy